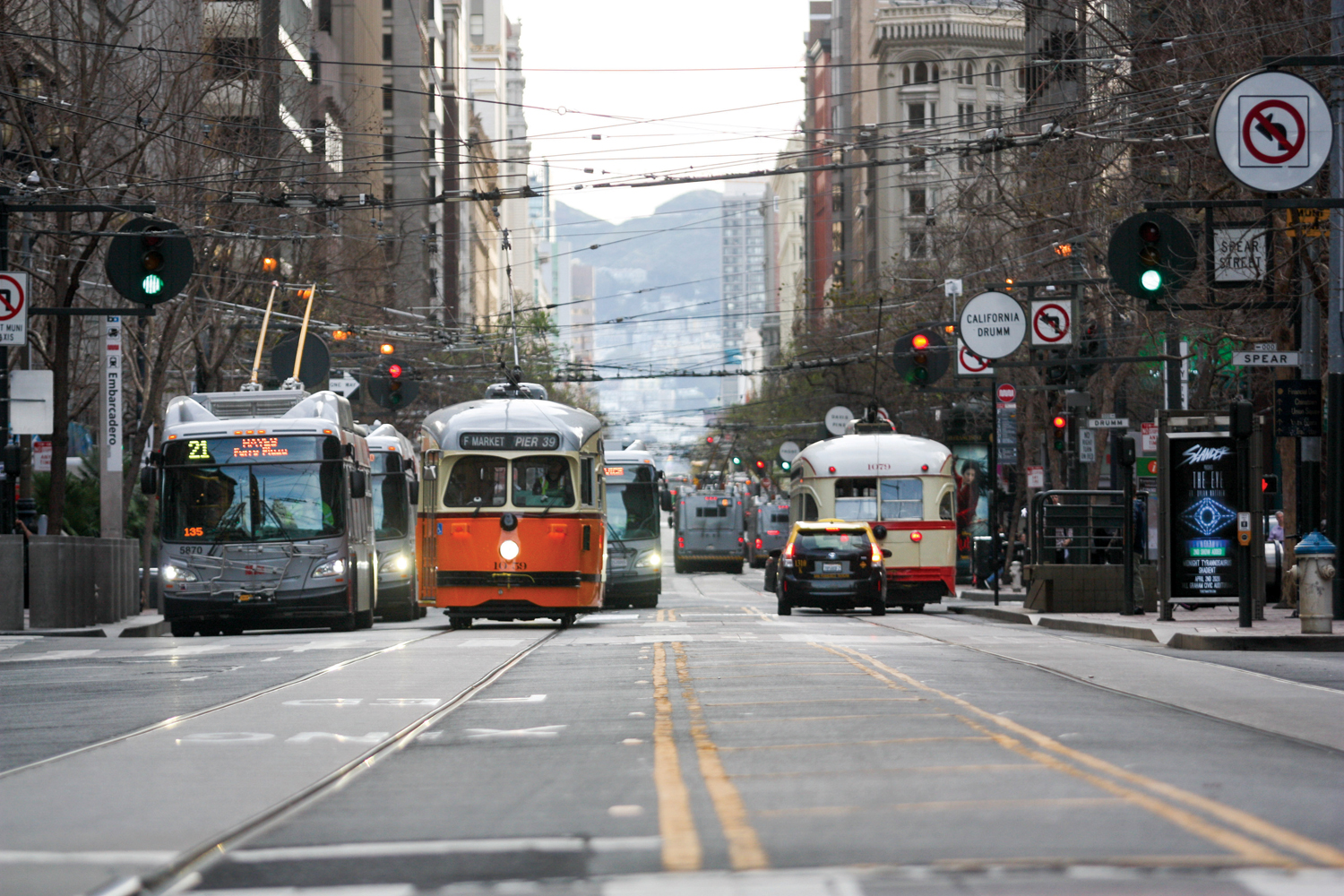 Transit on an open market

How a car-free Market Street changes the downtown experience

Market Street bustles on a typical afternoon in February. Crowds rush the sidewalks and packs of cyclists whir by. It’s Friday and workers are anxious to call it a day. An electric MUNI bus hisses to a stop, fills up and pulls out into its dedicated red lane.

It is “rush hour” but something is missing. There isn’t a single passenger car on San Francisco’s main thoroughfare.

At the end of January, San Francisco’s busiest street became car-free as a part of the Vision Zero program, with a goal to eliminate traffic fatalities and
injuries by 2024.

With 500,000 pedestrians on Market Street daily, and hundreds of cars passing through during rush hour, potential for accidents was high. SFMTA reports that in 2018, there were 123 injury collisions along the roughly 18 blocks of Market Street between Octavia and Steuart Streets. City officials hope the new restrictions will reduce these incidents.

SFMTA and other collaborating agencies refer to the new and improved Market Street as “Better Market Street.” However, it is still a work in progress.

Director of Livable Streets, Jamie Parks, says, “The initial data shows that it’s working very well,” in spite of the magnitude of the project.

After implementation, with no cars in their way, MUNI vehicles breezed through a large stretch of downtown, getting people to work faster and possibly even attracting new riders, although so far there is insufficient data to confirm this.

Prior to the shutdown, things were looking up for Better Market Street. Rush-hour loading restrictions for six-wheel commercial vehicles were implemented on Market Street in January, and more than 100 new passenger and commercial loading zones were put in place along the cross streets.

“In the first few weeks after Market Street went car-free we saw significant increases in bike ridership, and reductions in transit delays and collisions,” says SFMTA Chief Spokesperson of Media Relations Erica Kato. “Preliminary data showed that bike volumes increased by more than 25%, and transit travel times improved by up to 12%.”

“Unfortunately, our plan to collect more extensive data this spring was put on hold due to COVID-19 and the shelter-in-place orders,” Kato adds.

Plans to enlarge crosswalks and street corners to create new pedestrian “safety zones” are in the works. Infrastructural changes such as roadway repaving, upgrading traffic signals, and replacing Muni F-line tracks and overhead cables are tentatively scheduled to debut in the summer of 2020, but COVID-19 may impact that schedule.

“It feels like a bike party everyday!” — Jean Kao

Cyclists noticed huge improvements in their downtown commutes with the absence of cars on Market Street. “I love it!” says Jean Kao, president of the San Francisco Bicycle Coalition’s Board of Directors, “It feels like a bike party every day!”

Kao attends City College of San Francisco for occasional classes in her spare time, and commutes from the Castro District to the Financial District daily. She works at Populus, a tech company dedicated to helping cities monitor their shared transportation services, including bikes, scooters, and cars. Since bicycles still share lanes with buses, she feels Market Street is “not as safe as it could be,” but it’s definitely better.

City College student Hiya Swanhuyser says her husband’s new Market Street bicycle commute is similar to “what everyone says,” there is still a lot of vehicle traffic. She suggests the city work toward building bicycle-only streets, where buses, rail lines and poor asphalt are a thing of the past.

Longer term plans for Market Street do include wider bicycle lanes, but bicycle-only streets are a ways away.

On Market at 10th Street, which is the last block eastbound where private vehicles are permitted, cars line up sequestered in a turn lane, as if being sent off for punishment. Ride-share cars like Uber and Lyft line up too, because they must adhere to the same rules. One bold Lyft driver sneaks a rider in; the door slams and they hastily drive off as the light turns green.

Melandro Monterola, a finance student at City College who drives for both Lyft and Uber, says he does this all the time. “It’s risky but when it’s a red light, (riders) tend to just hop out,” he says.

While the new changes to Market Street might have been expected to further curb Uber and Lyft’s influence, Monterola, who has been a driver since late 2016, doesn’t think much has changed. “Even before, Market Street was off-limits for dropoff and pickup,” he says.

Now that the street is car-free, he thinks things have improved and believes most drivers would agree with him. “Driving on Market Street was scary … bicyclists and pedestrians everywhere. Now I don’t have to drive on that street anymore. It’s kind of a relief,” he says.

Uber and Lyft have caused congestion throughout San Francisco for years, but recently, alternative forms of transportation have sprouted up, like for-rent two-wheelers some call “shared micro-mobility” vehicles. These new modes of transportation are convenient, economical and
environmentally friendly.

Companies like Scoot and Lime provided 84 million trips in 2018, which is double that of the previous year, according to the National Association of City Transportation.

Currently, taxis and commercial vehicles can still drive on Market Street. The taxi industry has struggled to compete against new alternatives, and hopes the elimination of ride-sharing vehicles on Market Street will boost business.

Back on Market, a bright yellow taxi rolls by slowly, as if on display, but the back seat is empty. The driver peers out the window,
scanning the sidewalks for a rider.

While occasional customers have hailed Habtu’s cab from Market Street, he says the benefit is “not massive.”

The slight added convenience just doesn’t seem worth it to most riders. “If you close Market Street, they can walk to Mission and call (a Lyft or Uber) from Mission. It’s half a block.” Habtu says.

Uber and Lyft riders can clearly see within the apps that taxis are more expensive. “We’re not in the competition; the taxi business is lost already. You’re not gonna get it back by closing the streets,” he adds.

And it will likely get worse for taxis. There are plans to convert the existing bus-and-taxi-only lanes to bus-only lanes and extend them from Ninth to Main Street, a 1.5 mile stretch through the majority of downtown San Francisco. Only MUNI, pedestrians, cyclists and other non-motorized two-wheelers will have access to Market Street.

Habtu agrees that a car-free Market Street is a welcome change for some, “the bikers, they’re winning,” he says without resentment.

Habtu had hoped to resume classes soon at Laney College in Oakland, but drove for Uber and Lyft instead to pay his bills. However, like Monterola, he’s not
driving at all for the time being. The COVID-19 pandemic threw a wrench into all of his plans and Habtu is staying home, like much of San Francisco.

MUNI typically struggles to keep wait times reasonable. Two huge systemwide breakdowns occurred in the past year, including a 10-hour shutdown in April 2019, which resulted in the Mayor London Breed’s push for SFMTA Director Ed Reiskin’s resignation. The second breakdown occurred in early March 2020, shortly after Jeff Tumlin took over the agency. Now, in a pandemic, MUNI is running on a reduced schedule until further notice.

San Francisco is beginning to emulate other cities around the world where cars enjoy far less prominence. European cities like Copenhagen and Paris emphasize walking, cycling, and public transportation as effective ways to get around. High-speed rail systems connect cities in Asia like Beijing and Shanghai. In the city of Jakarta, twice as many people ride motorbikes than drive cars daily.

There were once large networks of urban streetcars in cities like Indianapolis and Los Angeles, but the Great Depression destroyed most private transit
companies. By the mid-1900s, fervent lobbying from the burgeoning auto, bus and oil industries, led to the dismantling of many streetcar lines and today’s staunchly car-centric way of life.

Lately San Francisco and other urban centers started shifting toward policies that push aside gas-powered cars in favor of cycling, e-scooters and public transportation.

“Driving on Market Street was scary … now I don’t have to drive on that street anymore. It’s kind of a relief.”
— Melandro Monterola

Cities like New York, Toronto and Oslo have adopted their own versions of Vision Zero, a movement first implemented in Sweden in 1997 to end highway fatalities.

Last year, New York City essentially turned 14th Street, one of the most congested routes in Manhattan, into a “busway” where private vehicles are only permitted to drive onto the street for quick pickups and dropoffs. The year before, Toronto put similar restrictions in place on its busy King Street, making huge improvements to the average travel times of streetcars there.

Kao and Habtu agree there is still a long way to go, but Vision Zero, Livable Streets and Better Market Street are the start of a fundamental change.

Until everything came to a halt in March, Market Street at a quick glance didn’t look incredibly different after the restrictions began in February, than it had in early January. Cyclists still cruise by, but with a little more breathing room atop bright red and green painted lanes and the F-train still jingles toward the Ferry building.

But now traffic is non-existent. San Francisco is on hold, and so is Better Market Street.