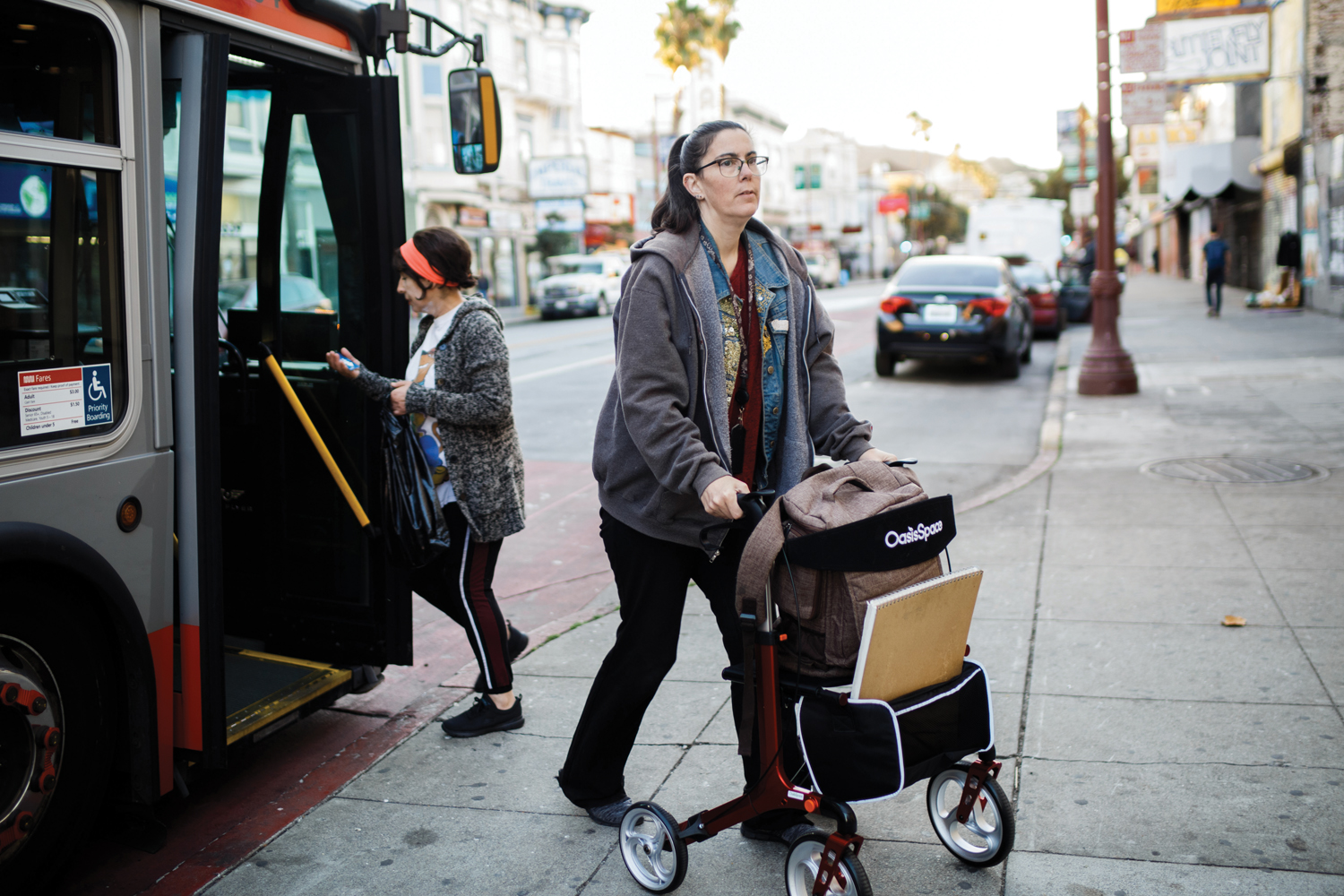 A student navigates a campus not built for her.

Early morning fog swallows Mission Street while Nikki Phillips waits for her 49-bus. She hopes there is a place for her to sit. “When you sometimes have to pass a bus by because there’s not a seat for you, it makes it harder,” says Phillips, whose degenerative joint disease, a form of arthritis, makes her daily commute more complicated than most. She heads to City College of San Francisco’s Ocean Campus to attend 14 credits worth of classes. Phillips, 48, sets a high bar, working towards two associates degrees, one in Anthropology and one in Psychology. She is a testament to City College’s commitment to educate all members of the San Francisco public, regardless of age or ability.

She struggled for years with her disabilities, but had to be officially diagnosed to qualify for assistance. In 2008, Phillips was diagnosed with an anxiety disorder, bipolar disorder, and Post Traumatic Stress Disorder, PTSD. Thanks to City College’s Disabled Students Programs & Services, DSPS, Phillips moves
forward with her education, seemingly without a hitch.

Life wasn’t always this good. Her childhood in Denver was tarnished by a toxic home life, punctuated by her mother’s abuse.
By the time Phillips was 12 her mother was forcing heroin on her. She left home to save herself. “I was big enough and I was old enough, so I left,” she says.

In those first three months on her own, Phillips suffered from substance withdrawal. Her grandmother got her an apartment in Denver, and she began splitting time between there and her father’s home.

After she regained her health she was determined never to let hard drugs dictate her life again. It’s this grit that defines Phillips, not her abusive past. “I cleaned myself up and I’ve never touched the stuff again,” she says.

She continued to go to school and worked at a grocery store to support herself. Phillips graduated high school in 1990.

On Christmas Eve, 1991 at age 19, Phillips married her childhood sweetheart, Emory Phillips. “It’s a decision I have never regretted,” she says.

Just two months after they wed, they were excited to start fresh with a cross-country move from Colorado to Shreveport, Louisiana where Emory Phillips had an opportunity to go to college. However, their optimism faded as they ran through their limited savings. They were homeless within weeks. “Nine months later we came running and screaming back to Colorado,” Phillips says. They settled down closer to family.

Over a decade later, they decided to try their luck in San Francisco, but the high-priced Bay Area was no more forgiving. In 2002, they found themselves homeless again. “We lived in the park, we stayed up on Hippie Hill,” says Phillips, “I carried more than my own body weight up that hill every night. That’s part of the reason why my body has given up on me.”

Phillips has a knack for picking things up quickly and found work. She was hired at a hostel and then worked for a theatrical lighting company, called Phoebus, which was her favorite job. “I started as the receptionist there and I ended up working on movies,” Phillips says and chuckles as she recalls her days on set for box-office smashes like “Transformers” and “Batman Begins.”

“Today we recognize that not all disabilities are physical, and many are not visible.” — Natalie Cox

Her mother reached out while in therapy and drug rehabilitation in 2012. They reconnected and Phillips forgave her.

Phillips was in treatment too, for her anxiety disorder, PTSD, and bipolar disorder. The pain and stiffness caused by her degenerative joint disease, which had just been diagnosed, progressed to a point that she had to stop working and rely on a walker and disability payments.

Five years after they reconnected, her mother died. Phillips was devastated, “I was looking closely at my own mortality,” she says.

Just a short time later, during the next election cycle, Phillips saw Free City College on the ballot and voted for it. “I got curious how it was free, and so I went online and tried to check it out. Three months later I get this email that says ‘it’s time to register,’” she says.

Phillips likes to learn, but for years didn’t think higher education was a possibility for someone like her. She was unaware of the extensive resources City College offered and she did not think to ask.

She was still reeling from her mother’s death, so Emory Phillips looked into resources at City College and found the DSPS program. She remembers him asking, “Well, are you gonna go?”

They visited DSPS together. “I really wasn’t sure how I was going to do this,” Phillips says, but with support from her husband and DSPS, Phillips made the leap and enrolled at City College in the fall of 2018.

The opening of City College’s DSPS program in 1977 established sustained and crucial support for over 3,000 students every year. Additional aid came with the passing of the Federal Americans with Disabilities Act, ADA,
in 1990.

The intention of the ADA was to offer protections to individuals with disabilities that are similar to those provided on the basis of race, sex, national origin, age and religion. Nowadays it is common to see students like Phillips using accessible ramps to get to classes, or attending courses accompanied by an American Sign Language, ASL, interpreter, but things weren’t as easy for disabled students a few decades ago.

Prior to the passing of the ADA, a disabled person in the United States faced innumerable barriers in their day-to-day experience that an able-bodied
individual would not think twice about. People who use walkers or wheelchairs could not easily access public infrastructure, but now the ADA requires all public buildings and transportation to offer ramps and elevators that can
accommodate them.

Before the bill passed, disabled City College students faced an uphill battle. Elevators routinely did not work, ramps were slow to appear, and change was held up due to a lack of local initiative. The ADA created a new and level playing field for people like Phillips.

Today, City College offers a variety of resources through DSPS. According to DSPS Department Chair Olga Galvez, they make sure everyone with disabilities feels welcome and receives personalized treatment.

“We work with students on what areas they might need support in, and which accommodations might be appropriate to assist them in being successful in their classes,” Galvez says.

Out of school for over two decades, Phillips knew she would need DSPS to succeed. “I receive special permission to record my classes. I have access to a scooter, and longer times on my tests if I need it,” she explains.

She is also granted special consideration for days she may miss due to her mental illness.

“I do struggle sometimes,” Phillips admits. But with the support and resources at DSPS, she is thriving. She says it’s not just because of DSPS, but also her instructors.

“If the teachers and DSPS weren’t who they were, I would not be here. They always have consideration for me,” Phillips says.

Some of her instructors have played an extraordinary role, giving her all she needs to perform well, but one in particular stands out, Anthropology Instructor Natalie Cox. Cox has been a teacher, mentor and friend to Phillips. “She is the best teacher that I have had since kindergarten,” Phillips says.

Cox is acutely aware of how important it is for instructors to accommodate disabled students. In her two years teaching and 17 years as a tutor for disabled students, including Phillips, Cox has witnessed many positive changes.

“Today we recognize that not all disabilities are physical, and many are not visible. Chronic illnesses, autism, psychological issues such as bipolar disorder and learning disabilities—these are all conditions which can and should be accommodated to promote student equity and success,” Cox says.

“I have known Nikki for two years now. She went from being my student to being someone I informally mentor from time to time, and I still check in with her regularly,” Cox says.

When they first met, Cox saw her enthusiasm. “It was unmatched by her peers, and she had the ability to critically connect with course concepts,” Cox says.

Limited motion doesn’t stop Phillips from being an integral part of City College. She tutors other students in statistics, psychology and anthropology, for little to no compensation.

Phillips is on track to finish her two associate degrees and graduate this spring. Her plan then is to take her talents and charisma to San Francisco State University. She hopes to triple major in psychology, anthropology, and her newfound passion, statistics.

One morning, around 11 a.m. she is in Batmale Hall, plotting an equation sprawled across a white board for a half-dozen statistics students in need of help.

Without her walker, Phillips shuffles across the room to get a closer look at the board. She demonstrates how to solve the equation, but it was still unclear to one student. “You’re right! I did it wrong,” Phillips admits with another chuckle. Her light-hearted personality keeps the tutoring fun, regardless of the material.

When asked what influences her academic choices, Phillips says she likes the behavioral sciences because, “I don’t understand people, and I find them fascinating.” How she came to her newfound love for statistics is just as endearing.

“I looked around the room and realized that nobody else was getting it and I started to cry. It was tears of joy, but I was sitting in the classroom and crying because I understood it.”