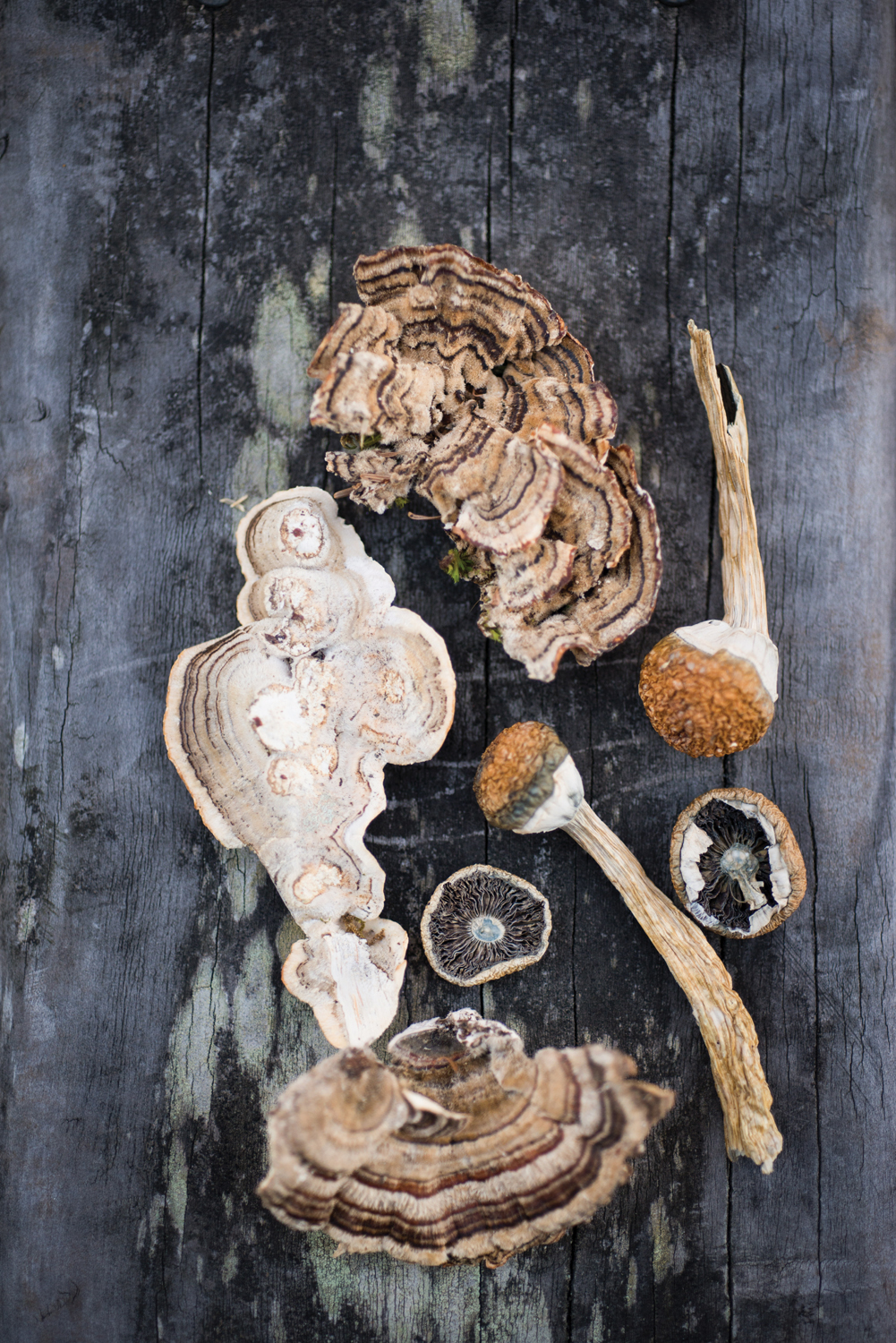 The late summer sun beats down on McConchie’s utilitarian bucket hat, adorned with various mushroom-related Bay Area organization buttons. The former City College of San Francisco student flashes a broad smile and hands an oyster mushroom to a student in his mycology class. McConchie’s elation for fungi can’t be contained. He feels indebted to these mysterious organisms for helping his family through his wife’s battle with cancer and his own struggle with depression.

Entheogenic plants have been utilized for thousands of years by indigenous cultures around the world. Yet recent research at various academic institutions has revealed modern therapeutic potential for their psychoactive properties. “The risks seem to be minimal but the potential benefits are high,” says Karen Hu, professor of biological psychology at City College.

The term “entheogenic” refers to a class of psychedelic drugs used to induce a spiritual experience by the user. Entheogens have historically been used and are still used today by various religions, including the Oumami in South America, the Native Americans of the Southwest U.S. and the Bwiti tribe in West Africa.
The most commonly known entheogens are: psilocybin, frequently referred to as “magic mushrooms;” ayahuasca; lophophora williamsii, commonly known as peyote; and iboga.
Although most scientific research is still premature, some swear by psilocybin as an effective tool for treating depression and anxiety, while others have found ayahuasca and iboga particularly beneficial in treating addiction.

On the heels of the legalization of the recreational use of marijauna in California through Proposition 64, which passed in 2016, Oakland City Council voted to decriminalize entheogenic plant-based psychedelics in June 2019. These drugs are still considered controlled and scheduled substances by the DEA.

This means that if an individual has a plant-based psychedelic on hand, they can use it within the city limits of Oakland, but obtaining it is a different story.

On a recent October afternoon, James McConchie slides open a creaky gate outside a Victorian building, revealing an eclectic art studio where his wife, Melinda McConchie, retails her art and fashion samples. The couple, who met in 2008 at a City College fashion class, have been married for seven years and have a 5-year-old son.

On the opposite side of the studio, James McConchie runs the Haight Street Shroom Shop. Behind a draped tapestry, he reveals a gourmet mushroom growing lab.

In his mycology class, students learn to cultivate edible, gourmet and medicinal mushrooms. James McConchie states an important disclaimer at the start of every class: his shop does not “demonstrate or encourage the cultivation, supply or use of psilocybin mushrooms.”
When Melinda McConchie was diagnosed with breast cancer in 2014, an old friend suggested James McConchie read up on the work of author and mycologist Paul Stamets, well known as the TED Talk mushroom guy.

In his first TED Talk, Stamets reveals how his mother’s breast cancer was cured through the aid of turkey tail mushrooms, which are purported to possess immune system-boosting and anticarcinogenic effects on the human body. Coincidentally, Melinda McConchie was diagnosed with the same type of breast cancer that Stamets’ mother beat.

To increase Melinda McConchie’s chances of surviving stage two breast cancer, and because she was under the age of 40, “they gave her ultra-aggressive therapy,” James says, which generally causes severe side effects. The following months were some of the most difficult for the McConchie family.

Melinda McConchie began taking turkey tail mushrooms, and according to James McConchie, she “went through the treatment relatively unscathed.”

Turkey tail mushrooms are not psychedelic, nor are they regulated by the FDA. They are approved as a “nutraceutical,” an alternative to pharmaceutical treatments.

“You’re making this personal recipe with all of these different supplements. You can use certain mushrooms to create a health-centered approach towards your life,” James McConchie says.

Melinda McConchie made it through treatment, but she and her husband weren’t out of the woods yet. The recovery period after treatment is always uncertain, and there is always a possibility the cancer will return.

The pressures of early fatherhood, a hellish rush-hour commute to Fremont and a wife recovering from breast cancer sent James McConchie spiraling into depression. He came across studies from Johns Hopkins University on psilocybin microdosing in individuals with depression.
A common strategy with psilocybin is to microdose by taking doses under a gram. These minute amounts of psilocybin can improve mood and creativity without a full psychedelic visual trip. Within three months of microdosing, James McConchie felt he was able to identify “what was going on internally.” His newfound clarity helped him move beyond the depression and demons that came with the uncertainty of his wife’s battle with cancer.

“After the psilocybin experience, patients find that there is an increase in openness to experiences,” Hu says.

As James McConchie’s knowledge blossomed, so did his passion for growing mushrooms. He wanted to share the art of fungus cultivation with his community. It’s been two years since the McConchies opened their small combined art gallery and retail mushroom business. The storefront is located on Hayes Street, just blocks from the epicenter of the 1960s psychedelic counterculture movement that is Haight-Ashbury.

Just as psilocybin helped James McConchie with depression, ayahuasca helped Todd Youngs with addiction.
His story sounds all too familiar:
sporadic recreational drug use turned a dark corner and Youngs fell into addiction in 1984, around the height of the cocaine epidemic.

He tried cocaine for the first time at 17. “I discovered right away that even just using it intranasally, I liked coke,” Youngs says, pausing then adding, “maybe a little too much.”

Youngs’ pleasure-seeking habits led him to alcohol abuse and eventually heroine addiction. “I went to jail at least a dozen times,” he says.
Two decades later, Youngs found himself back in southern Missouri living in his mother’s basement, under court supervision and unable to do what he considered meaningful work. “I called myself an unemployable headcase,” Youngs says. He was in his late 30s and still addicted to opiates. “Emotionally, I was a wreck,” he says.

He spent four years feeling “utterly helpless and hopeless” and was arrested again in 2008 on drug charges. When he was released five months later, someone suggested he try the psychedelic ayahuasca to help with his addiction.

Ayahuasca is made from the vine of the Banisteriopsis caapi plant, which typically grows natively in Central and South America. Indigenous cultures who reside in the Amazon basin have been using ayahuasca as part of their spiritual rituals for thousands of years.

“Ayahuasca ceremonies started in Peru and were indigenous to that region,” says Natalie Cox, an anthropology professor at City College. The vines used to brew ayahuasca became a coveted commodity by indigenous tribes such as the Oumami, who would trade for it. “It’s generally associated with a coming-of-age ritual… it’s a way of becoming a man in that society,” Cox adds.

The caapi root can be macerated and boiled down into a drinkable brew. In traditional indigenous cultures, a shaman prepares and administers the brew, guiding participants through an experience that lasts for hours.

“There are no records of these rituals per se, beyond the oral history of the shamans who were practicing them,” Cox says.

Today, ayahuasca retreat centers can be found throughout Central and South America, and even in southwestern states in the U.S. These modern-day versions typically involve a trained leader who can prepare the brew and lead participants through the psychedelic journey.

Typically, there is a “purging” after consuming the brew, which is common with iboga as well. Participants may vomit or experience severe bowel movements, but the shaman is close by for support. In more traditional ceremonies, the shaman may sing songs dubbed “icaros,” meant to enhance some of the visual effects of ayahuasca.

Shortly after learning of the healing potential of ayahuasca, Youngs travelled to New Mexico to participate in his first ceremony.

“My first experience was not overwhelming… but something started happening, some knots started getting untangled deep inside of me. I was having thoughts of things I hadn’t thought about in twenty years,” Youngs says.

“That first ceremony planted a seed,” he says, but then, “like any good alcoholic, I went back home to Missouri, promptly started drinking again and drank myself into jail three-and-a-half months later.”

While he detoxed miserably in the drunk tank, he kept coming back to his psychedelic experience. He describes becoming in tune with a voice.

Three weeks after his arrest and forced detox in the holding cell, Youngs began his journey towards sobriety. He enrolled in a 12-step program, but made a point to self-medicate with ayahuasca as additional therapy.

In a six-month period, he took ayahuasca 18 times. “I got a sponsor, I went to meetings, I read the books, I did it all. Those ceremonies I was having for myself were literally informing me and explaining the program to me,” Youngs says.

Addicts like Youngs may be on and off opioid treatment drugs like methadone and suboxone while trying to break their addictions.
“I was on methadone five different times over a period of 20 years,” says Youngs, referring to the period of his life before he discovered ayahuasca.

These drugs block the high of opiates, but they too can be “super, super addictive,” according to Eric Lewis, the associate director of the addiction and recovery program at City College that focuses on harm reduction counseling for addicts.
“Most of the people out there in treatment all started with prescription drugs,” Lewis says.

“Many get hooked pretty quickly.”

A number of San Francisco clinics often administer opioid-addiction treatment drugs in tandem with harm-reduction counseling.
By taking the entheogen iboga, activist Chor Boogie quit heroin with the help of his wife Elizabeth Bast. They both feel that the healthcare system may be omitting these therapeutic plants not from lack of scientific evidence, but for profit. Boogie says the western medicine approach to addiction doesn’t “want to cure anybody. It’s not harm reduction, it’s harmful.”

Lewis concedes most methadone clinics in San Francisco are for profit, but methadone can help addicts “get their lives back.”
The twisted greed of our healthcare system appears to be profiting from an opiate crisis from initial prescription to prescribed opiate-addiction treatment medication — something psychedelics could potentially alleviate.

For Youngs, methadone was not a solution. “It creates an emotional flatlining; there are no highs and no lows,” he says. Ayahuasca aids in a forced introspection of an individual’s insecurities and emotions which may lead an addict to more easily open up in therapy.

Through his use of ayahuasca, Youngs discovered he was holding on to some grief he had not processed, saying “Sometimes it can be kind of painful. It shows you stuff you may not want to see.” When it comes to helping addicts, Youngs believes “non-habit-forming drugs like ayahuasca should be explored.” He’s been sober for 10 years now.

After supplementing traditional treatment with turkey tail mushrooms, Melinda McConchie has been cancer free for two years and the passion that James McConchie has for mushrooms runs deeper than just his desire to teach. Since his psilocybin microdosing regimen, “I just don’t find myself going into the repetitive cycles of depression that I used to,” he says.

As support garners for entheogens in the Bay Area, these ancient organisms will continue to provide solutions to shortcomings in modern medicine.