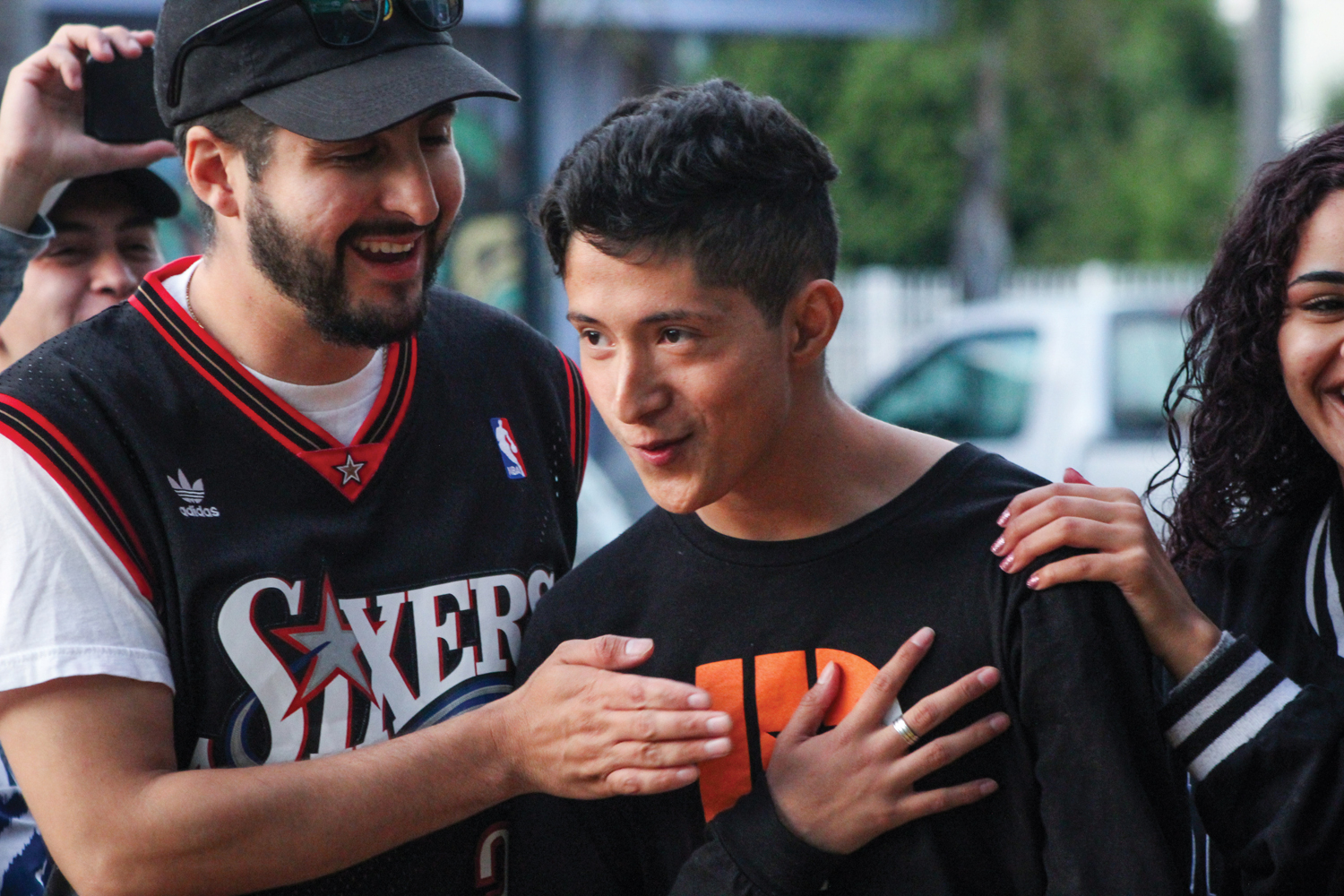 In a small studio near the foggiest edge of San Francisco, Miguel Navarro, a former City College of San Francisco student, mixes vocals and beats inside a cramped recording booth just above the main floor of Sunset Youth Services. Navarro, who prefers his artist name Fego (pronounced “fi-go”), mentors aspiring young artists — but at 29-years-old, he is hardly older than his mentees.

Fego mentors adolescents who want to take their music to the next level. He is one of the creative leads in the digital arts department at Sunset Youth Services, SYS, a nonprofit focused on helping at-risk 14- to 24-year-olds.

An at-risk youth is defined as “a child who is less likely to transition successfully into adulthood” because of exposure to factors like unemployment, poverty, addiction, violence, mental health issues, abuse or neglect, according to the Interagency Working Group on Youth Programs website.

Fego understands from personal experience the vital role mentors can play in a young person’s life, and has chosen to pay it forward for all the support he received when he was growing up. To him, a mentor is “a big brother who is there to help tackle different things I’m going through. To this day, I’ll reach out to mine if there’s something I’m dealing with.”

SYS’s mission is to create healthy and trusting relationships in order to promote real change in the lives of San Francisco youth.

In the role of mentor, Fego helps the young people he works with write, record and edit, but he does more than teach them about music. Sometimes it’s a challenge to guide the participants while building relationships.

“Kids are dealing with different traumas… opening up can be tough,” Fego says, but art and music help. “It’s where the conversation begins.”

In the cramped recording studio, Fego works with Abdiel “AB” de la Paz, 18, a first-year student at City College; and Sarah “Lexis” Eker, 15, a high school student at Ruth Asawa School of the Arts. With just enough space for a few people, they squeeze in to improvise a new song.

At the mic, AB feels awkward as he tries to rap. He explains it’s a new style for him. “It’s still fun though,” he says.

He is encouraged by his mentor. “Fego tells me, ‘It’s hard to jump into a new thing. You’re a dope singer, and you’re a dope rapper. When you’re jumping to something else, like from singing to rapping, you’re growing and challenging yourself as an artist. And that’s a good thing,’” AB says.

The digital arts and technology program at SYS has their own record label, Upstar Records. Creating music provides a therapeutic outlet for the participants who struggle with issues including childhood trauma, school suspension, expulsion and even incarceration.

Fego leads by example. He challenges himself in front of them by singing rather than rapping in his familiar style. Trying new things is a part of Fego’s process. It’s something his mentors taught him.

Having grown up in the Mission District, Fego can relate to the challenges his mentees face.  The reality of gang violence was never very far. At 9-years-old, he associated flowers with death because they were on the many streetside memorials in his neighborhood. “I was like ‘Oh crap, that’s another person,’” Fego says. It was a constant reminder “that you could be next if you’re not careful.”

Throughout his own adolescence, Fego was involved in the creative arts. He says they saved his life. He took drama classes at the Brava Theater and went to the DJ Project at Horizons Unlimited Inc., an artist development program where youth are taught music skills and encouraged to create music with a positive message. Both programs, located in the Mission District, were safe havens with no gang affiliation.

While these programs offered Fego protection, he still had to be vigilant. If he wore too much red in public, he worried about being perceived as affiliated with a gang. “I was like, ‘Oh crap, I gotta go home and change,’” he says.  At the DJ Project, youth mentor Arsenio Hernandez first noticed Fego and took him under his wing. To Hernandez, Fego stood out because of his animated quick wit and individual style.

“Growing up, I wasn’t really around… positive influences. And Fego is full of positivity.”
– Rogee

“It’s easy to get lost and swept into the group mentality, and Fego has always been able to pull (inspiration) from different groups, and then refine it for who Fego is.”

Hernandez explains that to be a good mentor is to listen and not make assumptions, saying “Often we try to say what’s right or wrong for someone without having a true understanding of where they’re coming from.”

After high school, Fego remained with the DJ project and enrolled at City College, “just to have some order in my life.” He
wasn’t aiming for a certificate, degree or transfer credits. “I just went in there and took classes that I enjoyed,” he says.

He studied everything from film and acting, to sociology and child development. One class, called Poetry for the People, taught by Interdisciplinary Studies Department Chair Lauren Muller, left a profound impression on him.

“It was one of the first times I felt like I was heard… I don’t even know if she (Muller) knows how much
that impacted me… but I remember her saying, ‘Hey, I really like your poem,
I really want to publish it,’” Fego recalls.

Though the poem was never published, Fego discovered the power of words. “I couldn’t hide behind the music,” he learned from Muller.

Muller understands the importance of building a relationship with a mentor and says it’s “a skill they (students) can use anywhere.”

After attending City College, Fego worked at various nonprofits and high schools around the city as a program coordinator. He was hired at SYS full-time this past June.

One afternoon, a Mission High School student named Rogelio Campos Garcia — formerly known by his artist name as Allmothug, but who now prefers Rogee — was riding the 33 Ashbury bus line and recognized Fego from his music video that has received over 3,000 views. To Rogee, Fego was famous. Although Rogee tried to keep his cool, Fego recalls how excited Rogee seemed. After getting off the bus, Rogee asked Fego if they could pose for a photo together. Fego obliged, and they went their separate ways for a couple years.

In high school, Rogee would sit with his friend Esly Juarez and write rap lyrics. When they heard about an opportunity to record their music for free in the recording booth at SYS, they jumped at the chance.

After graduating, Rogee enrolled at City College to explore different degree options. He says his college schedule offers him more flexibility, allowing for time to create music in the studio at SYS with mentors like Fego.

It is surreal and an honor for Rogee to work with Fego, an artist he has admired for so long. “Growing up, I wasn’t really around… positive influences. And he’s full of positivity,” he says.

Rogee launched his first record “Still Coastin’” this past July. He describes it as West Coast rap with vulnerable undertones. The last song on the album, “82290,” which refers to his brother’s birthday, is a dialogue between Rogee and his late brother who at 15, fell victim to gang violence. Like Fego’s music, Rogee’s too has struck a chord in his community and abroad, selling records in Japan and France.

Giggles spill out of the sound booth as Fego, AB and Lexis fumble the lyrics they wrote down moments before recording. After they calm down, they discuss their plan and record a new take. Bit by bit they build the hook, intro and first verse of the song.

Having a father as a minister meant AB grew up on gospel music and that his family moved around a bit. He landed at Ida B. Wells High School in San Francisco for his senior year, where he first heard about SYS and Upstar Records from an outreach presentation during lunch period.

He wanted access to a studio to learn how to record music. He started using the mobile recording booth SYS would bring to campus every Wednesday. After recording with them for a couple months, AB learned that the booth would no longer be coming to his school. To continue recording music, AB took a job opportunity at SYS.

A mentor is “a big brother who is there to help tackle different things I’m going through. To this day I’ll reach out to mine if there’s something I’m dealing with.”
– Fego

As he gained experience as a songwriter and beat maker, AB grew in confidence and began to record his own original music again.

In the recording booth, Fego took AB under his wing and they began to collaborate. Through the encouragement he finds at SYS, AB has overcome some of his insecurities and found great success. AB won a contest in early October to open for Grammy-decorated artist Busta Rhymes, and will release his first EP in 2020.

The trusting relationships Fego has cultivated with AB, Rogee, Lexis and others provide a stable space for these young musicians to aspire for more in life. Mentors like Fego model how success and growth is possible, even when up against tough odds.

“He’s always there, aside from music, and he’s always been a very caring person,” AB says of Fego.

Rogee adds, “He tells me, ‘You got this… believe in yourself.’”