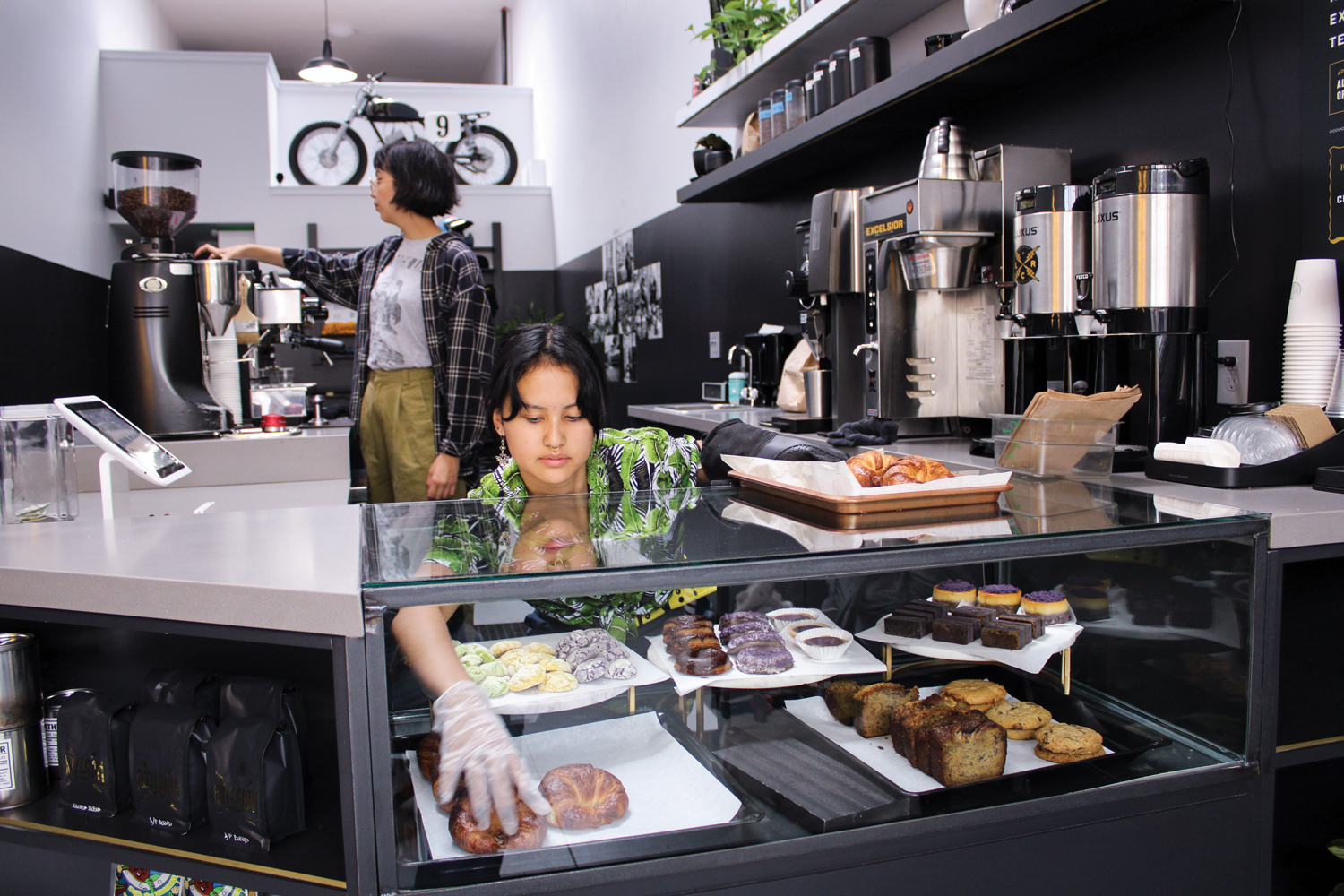 Excelsior Coffee has only been open since June 2019, but owners Lea and Andre Sabado spent two years renovating the shop.

The pair financed the endeavor by replacing their vintage cars and motorcycles with an espresso machine. The space Excelsior Coffee occupies has its own history. “It was an underground gambling den, then they got evicted, and the space was empty for a year-and-a-half before we took over the lease,” Lea Sabado says.

She did have some fears before opening the store with her husband — the biggest being a bad reception from the neighborhood. With a hefty business loan and personal savings on the line, the small business had little margin for error.

Brick-and-mortar storefronts like Excelsior Coffee must keep up or shutter up. Between expensive retail rents, high wages and increased food costs, profits in food service can be narrow.

“While I still see San Francisco as an incubator for new chefs to gain experience, I definitely tell my students about the difficulty of starting a restaurant here. It’s crazy hard,” says Vince Paratore, a City College of San Francisco restaurant management instructor.

Turnover in the restaurant industry has always been notoriously high, particularly in cities like San Francisco, where retail rents are constantly rising. Commercial retail rent in San Francisco increased 16% from 2012 to 2017, according to real estate data company CoStar.

“While I still see San Francisco as an incubator for new chefs to gain experience, I definitely tell my students about the difficulty of starting a restaurant here. It’s crazy hard.”

Labor costs are high too. San Francisco’s 2019 minimum wage hike to $15.59 per hour is considerably higher than most cities across the state, which average $12 per hour, according to the nonprofit Economic Policy Institute. Such a high minimum wage particularly hurts struggling restaurant owners with already thin margins.

“A restaurant in San Francisco can get employees — the trouble is hanging on to them. Labor cost and housing cost is driving them away and really stressing the industry,” Paratore says.

Inflation, international tariffs and other market fluctuations have significantly increased food costs in San Francisco. In addition, customers have come to expect artisanal, organic and higher quality ingredients when dining out.

A recent decrease in immigrant and domestic agriculture laborers has forced farm-owners to harvest crops that are less labor intensive. Farmers are implementing more automation to their production, a California Farm Bureau Federation survey says. The price for labor-intensive crops, like avocados, has risen significantly.

The owners of Excelsior Coffee, the Sabados, keep food costs down by offering a consistent, select menu made with affordable ingredients. “We are definitely strategic,” Lea Sabado says, referring to many items on the menu priced under $5.

At Souvla, on Valencia Street, wafts of rotisserie chicken float out onto the street enticing potential customers. Souvla offers Greek food in a sleek, modern setting with free Wi-Fi. The local chain boasts four locations and a corporate office in San Francisco.

Souvla is considered “fast-casual,” which is loosely defined as counter service ordering but with higher quality dishes than your typical fast food joint. Eateries like Souvla have a small wait staff who attend to customers after ordering, but some fast-casual spots offer no wait service at all.

At Mixt, a build-your-own-salad format restaurant on Valencia Street, customers select from an assortment of fixings and have their food prepared behind a glass counter by an employee. When the food is ready, a cashier finishes the transaction.

The Melt, a grilled cheese eatery founded in San Francisco, has both a self order kiosk and cash registers. It was one of the first companies to implement smartphone ordering and pickup, according to SF Gate.

For fast-casual restaurants like Souvla, Mixt and The Melt, much of the business is delivery and takeout, which requires minimal labor beyond food preparation.

Souvla, Mixt and The Melt are all organized as small corporations, meaning they have stronger financial backing through outside investments. A slow day at Mixt on Valencia can be offset by good earnings at the Mixt location in the Financial District. Conversely, a slow day for a mom-and-pop restaurant can be far more damaging.

At longtime Lakeside neighborhood restaurant, Villa d’Este, owner Ramon Oropeza is acutely aware of this. “You need to save for the very slow days,” he says.

Villa d’Este is a charming traditional Italian restaurant owned and run by Oropeza since 1978. Since Oropeza owns the building, he doesn’t have to worry about rent increases.

Waitress Yannee Buorn, a City College student who has worked there for five years, describes it as “a hidden gem.”

Oropeza, who calls himself a “do-it-yourself” manager, vacuums the burgundy rug in the dining room, cleaning up from the previous night.

He offers advice to other restaurant owners, pointing out, “You need to be willing to learn as you go, and above all you really need experience to survive.”

Oropeza has a solid, older customer base, but he wants to draw more people into Villa d’Este. He is looking to expand the restaurant’s social media presence.

The Sabados appreciate the loyal clientele they’ve garnered since they opened less than a year ago. Lea Sabado attributes the coffee shop’s early success to neighborhood support.

She attributes this to “a lot of outreach,” which she hopes will be worth it in the long run since she envisions Excelsior Coffee as a long-term investment in the neighborhood. Not only do the Sabados own a business in the Excelsior District —  they live there too.

Customer Leo Bulatao sports an Excelsior Coffee sweatshirt emblazoned with a lightning logo as he sips his coffee and enjoys a croissant sandwich. “It’s a great place that serves great coffee and pastries, that’s locally owned by people who’ve grown up in this neighborhood like I did,” he says.

Excelsior Coffee takes its name from both the neighborhood and the owners’ favorite motorcycle brand. One of their many motorcycles is perched above a door frame with a large yellow neon lightning bolt, their logo, near the entrance.

“Executing a logo… and making it appealing helps to bring in customers,” Lea Sabado says. She also believes it is a must to pay special attention to curating their social media. She struggles to find time for social media marketing, “but spending the time and money… benefits you in the long run,” she says.

Excelsior Coffee may be doing well in the current climate, but restaurants like Villa d’Este, once plentiful, are now a rarity. Edgar Torres, a professor of Latin American studies at City College, says he misses some of the old Mission District mainstays like La Rondalla, a popular Mexican restaurant with a bright red facade and an iconic, if not historic, neon sign hanging out front. La Rondalla was open for decades and had a cult-like following. Live mariachi bands would parade from table to table, creating a party-like atmosphere.

Originally opened in 1951 by Carlos and Esperanza Barrios, La Rondalla was passed to their son Carlos Cruz Barrios, and then to Cruz Barrios’ daughters Luna and Betty Barrios. It stayed open for 46 years before closing quietly in July 2016 due to legal complications. A message left on the door read, “We are closing – God bless you. P.S. We love you all.”

Whether it’s a cafe hangout, traditional restaurant dining or the thriving fast-casual scene, owners and managers must get creative to succeed.

Using a combination of strategies like creating a welcoming atmosphere, cutting costs and employing clever marketing tactics, these small businesses work smart to survive. The food won’t change, but the way customers dine out will.