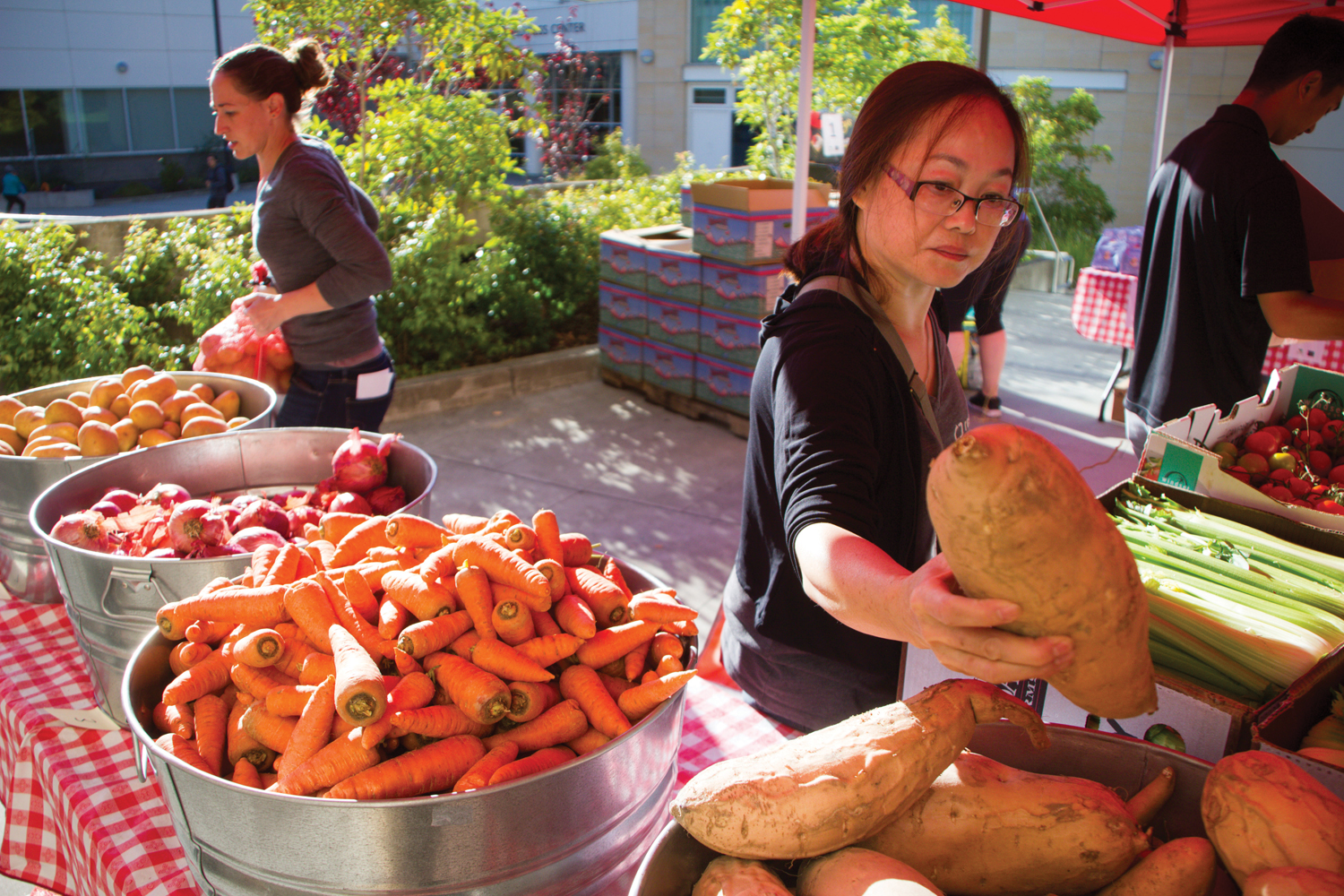 Story and Photos by Emily Huston

For the 40% of City College of San Francisco students who are food insecure, healthy food isn’t easy to come by.

The City College Food Pantry Work Group, who initially studied food insecurity on campus, has worked to change that. In February 2018, a dedicated group of faculty, staff and teachers started a food shelves pilot program offering free snacks to hungry students. As described in the Fall 2018 issue of Etc magazine, the food shelves offer students up to two snacks per day.

But the packets of oatmeal and ramen weren’t enough. Since its formation, the work group campaigned for a bonafide food pantry.

Every Tuesday, students in the know queue up half an hour early for a 9 a.m. opening. An apple-red awning shelters the tables that groan under the weight of boxes of Cheerios, bags of pita chips, buckets of plums, jars of peanut butter and sacks of apples. A steady stream of students descend the stairs into the plaza, then climb back up heaving cardboard boxes stacked with food.

“The pantry’s gonna help me get through this week. It’s gonna help a lot,” says custodial services student Diana Linares, as she sits next to the market with her haul.

In January, City College introduced the long-awaited Rams Market in partnership with the San Francisco-Marin Food Bank, offering free fruits, vegetables and pantry staples to any registered student. Since opening in the spring 2019 semester, it serves upwards of 190 students each week.

Nutrition teacher and market volunteer Jonathan Siekmann says, the Rams Market is “for everybody, for all students.”

Food insecurity is a national problem among college students, according to the Hope Center for College, Community, and Justice’s 2019 report surveying nearly 86,000 students from two- and four-year colleges across the country. The authors found that nearly half of respondents were food insecure, meaning they had “limited or uncertain availability of nutritionally adequate and safe food.” The most extreme form of food insecurity can result in losing weight, experiencing hunger pangs and regularly skipping meals.

For hungry students faced with a long day of classes, the Rams Market can provide lasting relief.

“Depending on what you eat, it could last you all day long. I eat a nice bowl of oats and it’s like I’m superman. I’m on it!”
– Ken Young

“If you go (to the food shelves), you’re still hungry,” says sociology student and market volunteer Juan Ernesto Renteria. “But now with the Rams Market, they give you food for the whole week… You have something to eat at home.”

“I tell anyone every time I can about the market,” he says, estimating that it saves students at least $40 a week in grocery bills.

“If I have three or four containers of tuna (from the Market), I’ll make a tuna salad with onion. I chop the onion. I add olives. I add some tomato, maybe celery, a little mayo, a pinch of salt, and tostadas and I chop a little jalapeño,” Renteria says. “It gives it a spice. I have a nice meal for the afternoon.”

Students’ families benefit from the Rams Market too. Yingyi Ye, a student who splits her week studying ESL and medical assisting picks up fresh apples, oranges, bananas and other fruits for her two children.

Some of the healthier options available at the market might not appeal to children. “The vegetables… ehhhh they’re picky. We have to force them,” says Linares, who’s a mother of four.

Linares typically makes soups from the produce. “Sometimes we’re like, ‘No, you have to eat this because this is the only thing we have. Right now we’re broke,’” she says.

The weekly program ensures Linares can access fresh produce for her children. “It lets them eat for at least the next two days, tops three,” she adds.

Renteria agrees. He takes home the market’s produce for soup and salad, “Those little containers for jam? I skip those. I skip the cereal. I avoid the chips. I’d rather get more vegetables, the healthy stuff.”

To help students rushing off to 9 a.m. classes, the volunteers usually start serving around 8:45 a.m. or earlier. The market stays open until 10:30 a.m. or until the food runs out.

The popularity of the new Rams Market means latecomers might not be left with much choice. Ye says she often misses the good stuff after having to drop off her two kids at school.

Student Moon Ong, who studies child development, uses the Rams Market every week to help feed her family of four. She recently arrived only 20

minutes after opening and texted her friend, “You don’t have to come. There’s nothing left.” Only a few heads of celery and bags of potato sticks remained.

Amy Coffey, management assistant of student activities and director of the Rams Market, explains that the market’s food allotment from the San Francisco-Marin Food Bank depends on how many students signed in for food the previous week.

For some students there isn’t enough time to visit the market. Valeria Trujillo, a second-year student taking general education classes, has only been to the Rams Market once because she works 80-90 hours per week, including Tuesday mornings when the market is open.

On a typical day Trujillo powers through three shifts, leaving only one day for classes each week. Whether she’s working as a cannabis delivery driver with Eaze, tossing pizzas at DNA Pizza, or showing open houses for Rentals in SF, Trujillo struggles to find time for a healthy meal.

“When you have limited time available, it’s nice to have a place to take care of yourself,” Trujillo says of the Rams Market. “What we eat affects how we work.”

Although grappling with its growing popularity, the Rams Market’s existence is a hard-fought victory. The work group organized for years to establish a food pantry and food shelves on campus.

Due to the success of the Ocean Campus food shelves last year, City College expanded the pilot program to five centers this fall semester. Shelves at Civic Center, John Adams, Chinatown, Downtown and Mission Centers now join the six existing at Ocean Campus. Southeast and Fort Mason were not included due to those centers’ smaller student populations.

“We went with the ones where we could really maximize the impact for students,” Coffey says. “I would love to roll them out everywhere. That’s my long term plan.”

For students to thrive, access to healthy food makes a difference. The market and food shelves serve as vital resources for students who strive for a better academic future.

Since last interviewed in the fall 2018 issue of Etc, computer networking and information technology student Ken Young, who is working towards a doctorate in psychology, still regularly pops by the food shelves before class to grab a granola bar, Fig Newton or protein-rich beef jerky stick.

“Depending on what you eat, it could last you all day long. I eat a nice bowl of oats and it’s like I’m superman. I’m on it!” Young says, laughing.

National studies show students who experience food insecurity suffer academically. According to the Hope Center for College, Community, and Justice, food-insecure students report grades of C or below at a higher rate. What’s worse, the study also found that only 20% of food-insecure students in higher education take advantage of public food benefits like food stamps.

College food pantries can pick up the slack. Although no studies exist on the Rams Market’s academic impact on City College students, access to healthy food is the foundation to any learner’s success.

Students like Young go to college to pursue the promise of a life made better through education. The Rams Market helps ease the stress of putting enough food on the table, allowing students to focus on their dreams instead of how to pay for the next batch of groceries.